Confidential Information Leaking -- The Threat You Should Concern

Being employers, do you have any idea about leaking of company information and trade secrets? Does it even cross your mind or let you be frustrated?

Seeing below the statistics,

If you are concerning your businesses’ profits, all of the above are readily available to your employees and thus are subject to be leaked out of your company to the wrong hands - possibly competitors.

Until now, almost all companies implement traditional monitoring surveillance security and protects such as firewalls, passwords, encryption, and more; however, this does not protect you from those employees who have access on passing it outside of the company.  More than three quarters of all American businesses report company confidential and proprietary information being circulated outside the company, resulting in millions of dollars in litigation and lost revenue.

That is a true fact which we can’t deny -- traditional monitoring surveillance solutions and protections have been not enough for current office working environments. By monitoring all computer and Internet activities you now have records of who printed what, who copied what, who sent this email and who received that email.  There is literally nothing an employee can do on your computers online and offline that will not be recorded. And most companies’ theft cases also showed us more and more insider employees leaked the confidential information and trade secrets via internet email or took away with personal portable storage devices.

So you need one better surveillance solution which is running in full stealth mode and without much system resources taken. Also you need surveillance tools can centralized the all the monitoring logs and screenshot into one place which let you be easy to understand what your employees are doing and been done.

Imagine if you found out confidential information was leaked and you had the ability to search your entire networks logs to see where it was leaked and by who at what time.  Pure evidence sitting right in your hands to allow you to take further actions!  That is what you should want and also the employees surveillance should do for you. 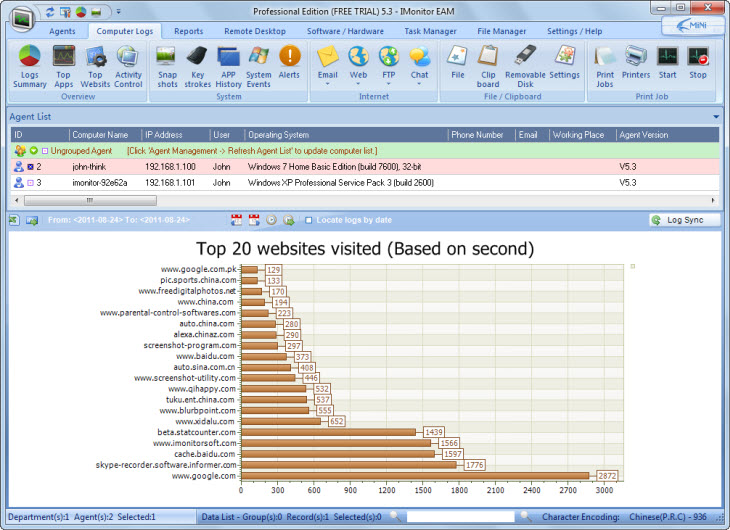